Alice is the eponymous character in the podcast, Alice Isn't Dead. She was married to Keisha, and was presumed dead, vanishing mysteriously before the start of the series.

Alice met Keisha during a study group session at the college they both attended, located somewhere in the Bay Area in California. At first they were just friends, and then 'friends who sometimes had sex', as Keisha later described it, before Alice kissed her on the beach one day and told Keisha she loved her. They eventually moved in together in a tiny cramped apartment in the Bay Area, and a few years after that, they got married. They move again, presumably into a house somewhere in California, and life went on. They traveled out of the country once, and Alice led the way, due in part to Keisha's anxiety issues. Alice would always be the one to drive since Keisha didn't like to.

At some point during her life, long before her disappearance, Alice stops at the roadside stop The Amazing Painted Rocks! in Arizona to use their bathroom while on a work trip. She sees someone being attacked on a rise above the rock by a Thistle Man, and, despite her own anxiety issues, goes to attack the Thistle Man to try and save the person. With the help of the person after they are freed, they kill the Thistle Man, and the person introduces herself as Lucy. She offers Alice a job with Bay and Creek, hunting these creatures along side her, noting that she was impressed with Alice's bravery. Alice, horrified that she killed someone, but equally horrified and scared that creatures like the Thistle Men existed in the world, agreed to take the job. Alice works for Bay and Creek for an unknown number of years prior to the start of the series. At some point, Alice is shocked by how normal she considers her life now, hunting down and killing Thistle Men, and wonders about her life choices. About a year or so before the beginning of the series, Lucy tells Alice that Thistle had started to attack family members of Bay and Creek employees in a tactic to weaken Bay and Creek. Alice says she'll quit Bay and Creek in order to keep Keisha safe but Lucy tells her that won't work, as Thistle won't care whether or not Alice is an active agent, they'll go after Keisha regardless. Alice agonizes over these facts for an unknown amount of time, having trouble sleeping, eating, and finding it difficult to concentrate. Finally she decides to detach from Keisha in order to save her, even though it nearly destroyed her to go.

Months later, Alice, now feeling worse than ever as she considered Keisha to be the 'last human part' of herself, her only attachment, wanted to tell Keisha everything and go home, but Lucy tells her she wouldn't be able to explain this in a way that wouldn't sound crazy to Keisha, nor would she be able to protect her. One day she spots a film crew covering a news story of a violent crime, and, in her grief, she pushes her way to the front of the crowd so she could be recorded by the film crew, in hopes that Keisha would see the broadcast and her. Despite Lucy being furious over this, Alice keeps getting herself on camera in crowds at events they go to investigate, in hopes that Keisha will notice, which she does. Alice would later regret these actions, as it was precisely this that sends Keisha on her journey to find her at the beginning of the series. 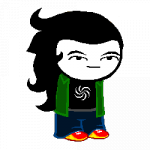